My name is Tammy and I am the Americorps VISTA at the California Afterschool Network. I am a recent graduate and going to graduate school this upcoming fall. I am an Asian-American (Chinese) born in Boston and grew up in the midwest. And this is my story…

Growing up in the suburbs of Omaha, Nebraska, it was not particularly diverse. In my grade, I was only one of two East Asian-Americans by the time we graduated high school. Granted, there were only 40 of us, but the demographics were still off.

I did, however, have an Asian community that was made up of my parent’s fellow friends in an organization called the Omaha Chinese Community Association. Certain cultural moments felt like they could only be shared accurately in these spaces, like family dynamics. But even still, it was not often that we would complain, because it was the norm. So, I had no luck expressing my mental health consistently anywhere. I didn’t feel comfortable speaking about it to my friends for fear that I’d burden them, and I certainly didn’t want to tell my parents. Most of my exertions of emotions were in my room alone, talking to myself through my own problems.

A lot of stigma from the Asian community was the reason why my parents never wanted me to go to therapy. Their thought was that I just needed to actively get my mind to think away from the mental hindrances and that all would be made well. When I first mentioned going to therapy under my undergraduate’s counseling office, it was met with discontent from my parents. They wanted my sheer willpower to be the cure. I decided that they were right and figured that my anxiety was due to academic stress. This year, I finally got a chance to get a therapist. Understanding and talking through all the negative effects my parents subconsciously put on me during my formative years was mind-boggling. It made me realize there was a lot of relief that many Asian-Americans could not get because of the stigma.

There are many factors that affect mental health, but here are some main racial and cultural factors: 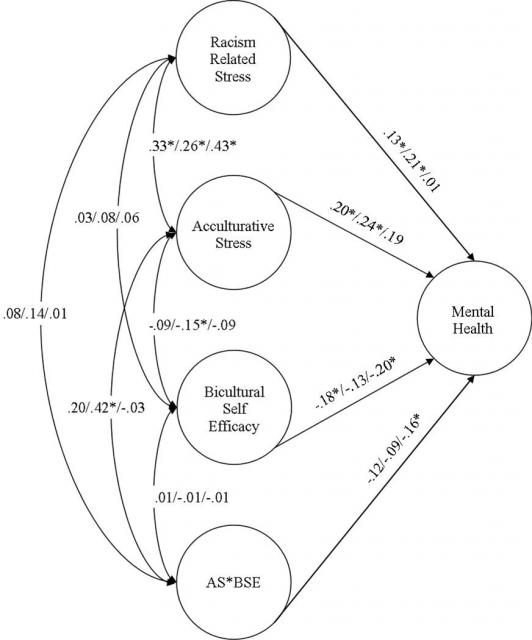 With racism still actively present, some discrimination brings on race-related stress. Daily microaggressions or being discriminated against at school or work have long term effects that can cause the individual stress. Negative life experiences that happen to those with the same racial background, like attacks, can create a stressful response. Stereotyping in the media, such as being typecast as a nerd or knowing martial arts, ultimately hurts the individual as well. These stressors, especially in youth, have affected mental health and are a predictor of depression.

Some immigrants and their offspring go through acculturation or assimilation. This is when 2 or more cultures come into contact with one another, and there is a shift in either or both cultures. This process involves multiple stressors that impede mental health. One of the biggest issues is the language barrier, which creates younger kids that have to act as translators.

I remember one moment in 8th grade when I felt the acculturation. My parents, having grown up in China, had never introduced me to American 80s music. So during an 8th-grade dance, when Journey’s Don’t Stop Believin’ started playing and everyone else started singing along, I was extremely confused. I felt super awkward, and like I didn’t belong at the school, like an outsider.

There is a huge difference between my mother’s and mine perspectives on how to go about things. Because she immigrated halfway through, her formative years were shaped by Chinese culture. So things like failure and discipline were addressed differently by us. There were a lot of moments that caused more stress for me because my mother handled her language and demeanor unhealthily.

Within therapists, there is also a deficit of people who understand Asian-American culture. There are language barriers and cultural differences that one must understand to dive into the mental health of some Asian-Americans. If one does not learn the proper way to address these factors, one could end up harming the patient with microaggressions or improper treatment.

One such factor is the model minority myth, designed to perpetuate Asian-American stereotypes. It was created to show how if a group was law-abiding and pulled themselves up from their bootstraps, they could achieve a level of success. This hurts all communities for 2 reasons. 1) It places Asian-Americans in the role of an assimilated submissive conglomerate all while still placing them at an arm’s length as foreigners and labeled as “exotic”. And the second reason is the harm it causes the other communities of color and is especially used as a weapon toward anti-Blackness. The notion that Asian-Americans are successful downplays the discrimination and impact of racism by dismissing the factors that actually play in the disparities among races.

When 2020 rolled around, there was only one titular topic, COVID-19. And when there is fear mixed with confusion, there is always a scapegoat. The rise of Asian-American attacks had begun during this time, with shootings and beatings on subway rides and corner stores.

I remember hearing story after story and feeling terrified but not surprised.  All the attacks brought what Asian-Americans who studied history always knew, the xenophobic history since the 19th century. This included the exclusion acts that were created specifically to kick out would-be immigrants and the internal racism designed to torment those living in the states. The so-called minority myth mentioned before is what became damaged, that Asian-Americans were going to be uplifted as an “example” until it was no longer convenient.

The mental health crisis within the Asian-American community was exacerbated from this moment. There was a lot of fear that created race-related stress and a lot of “am I next?” 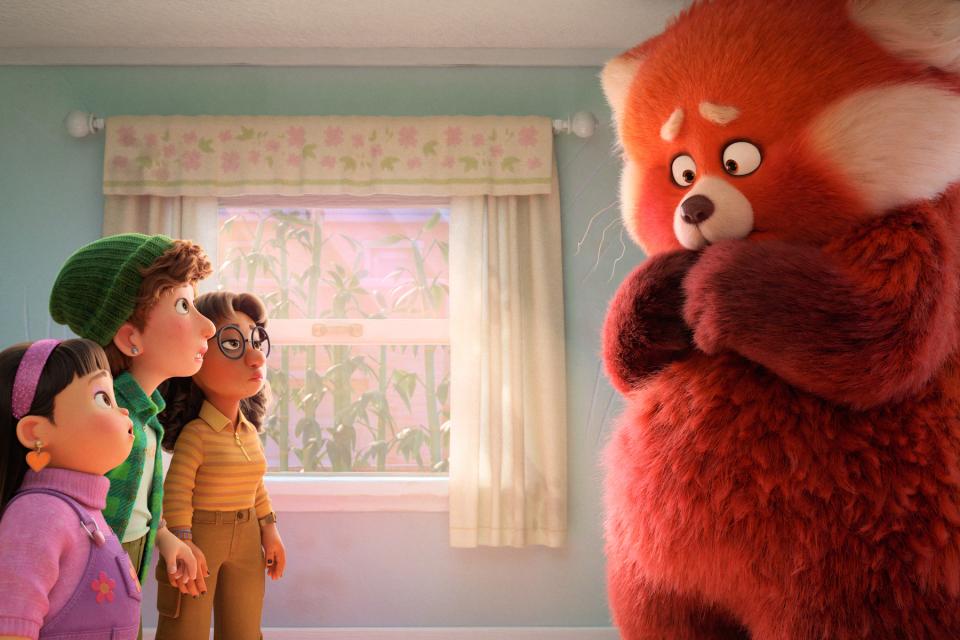 Last month, I was given a movie recommendation request by my therapist, Pixar’s Turning Red. The continuation of Disney & Pixar’s series in creating stories about minority family structures, adding to movies like Encanto and Coco.  I had heard that the movie described anxiety symptoms really well, and wanted to see the visualization of mental health from an Asian-Canadian lens. The movie describes a young girl by the name of Mei Lin whose extreme emotions cause her to turn into a red panda. This condition is passed on to every woman in her family, but they have all hidden away their red panda in shame. The movie explores the journey as she discovers her red panda as a positive and ultimately decides to keep it. As I finished the movie, I was still thinking about when Mei Lin lied to her mother (Ming) about her mother not causing her stress. The mother actively wanted to care for her daughter but her methods were less than ideal. But since there was an unspoken rule of not addressing concerns with her mother, Mei Lin decided to endure the pain to make her mother happy. One of the more surprising parts was the scene where she brings Ming, in younger form, through the forest towards the portal. Ming is scared and is crying, an “extreme” emotion, and reminds Mei Lin of herself. She realizes that her mother and she are not that different after all, Mei Lin’s mother has just suppressed her emotions as she was told by ancestors before her. Ming decides to conceal her red panda but it is within a Tamagotchi which she still feeds, meaning she starts to connect back with the emotions she tried so hard to shove away.

I learned from a young age that the only way my mother thought for me to progress forward in life was through academics, not experiences. Academics led to a job which leads to wealth which is how to be successful in life. There was no other way to be successful or to even be happy. Staying focused and shoving away the “extreme” emotions was the right way. There was no wealth in enjoying everyday life, like going to concerts or to the movies.

When I watched Turning Red, I got a similar feeling when I was watching Encanto, especially the scenes of Mirabel trying to fit into her family. The way the family is structured felt very similar to my life. As an older child, I was always pressured to set an example for my brother. There was also a protective element, where the burden was held by me so that my brother would not feel it. Through growing up I have understood that if I exert enough effort in trying to prove to my mother that I could win awards and pass tests, I could be worthy of her appreciation and love.

The sense of belonging…

Asian-Americans are not a monolith, and we should not be categorized into grades and careers. We should not only be recognized and integrated into American society because of our stereotypes but also because we are unique individuals. Because while I do have influences from my parents and mainland China, I grew up in the United States– with American values and I am uniquely different in that way.

The two movies had one big common theme: not belonging. In Encanto, the only way that Mirabel feels that she belongs is when she is contributing– by bringing in gifts and making sure the festivities look nice. However, her grandmother cannot look past her lack of a gift and subconsciously ousts her from the family. In the climax of the movie, Mirabel exclaims that “I will never be good enough for you… no matter how hard I try… no matter how hard any of us tries.

This is the center of the mental health crisis, not just for Asian-Americans, but for all minorities, for all people of color. The sense of belonging and being good enough feels so out of reach, even with all the effort that is put in. So I issue a decree. Starting now, we should all feel like we belong and we will command the spaces we are in because we deserve it. I will start.

My name is Tammy. I am Asian-American. And I am good enough.